There are just a few “must-haves” for me to enjoy a piece of gear. Those “must-haves” are first and foremost a piece of equipment must be quick and easy to use, and the second “must-have” is the gear must be good enough I forget about it and focus on creating a great video. I want zero obstacles. I do not wish to “workaround” an issue. I do not want to struggle to make something better than it is. I do not want to compromise. Most production days have enough frustrations, and I don’t want to add to those frustrations with less than an ideal kit. For a Micro Four Thirds cinema lens, the DZOFilm 20-70mm T2.9 does not compromise much. 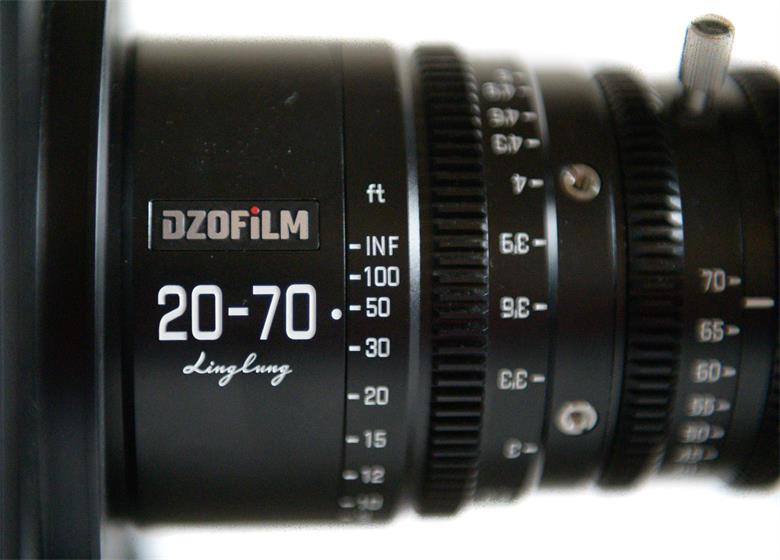 I think the DZO Film 20-70mm may be one of the best lenses for the Blackmagic Pocket Cinema Camera 4K. It is small, sharp, and fits just about most situations. The cinema styling with .08 geared zoom, focus, and iris helps Blackmagic Design Pocket Cinema Camera 4K shooters nail exposure, focus, and composition. I shot with the DZO Film 20-70mm a TON.

The Keith Urban concert was a light festival, as are most live music shows. In this video below, which is only a small sample from the New Year’s Eve concert, you can see how the DZO Film 20-70mm handled the flare and shows off the lens’ range. At 70mm, the lens stayed sharp, whereas older lenses can turn a bit into mush at the long end of the range. While I may prefer a wider lens than a 20mm on the Blackmagic Pocket Cinema Camera 4K, in this case, 20mm was wide enough to capture the stage. Being able to crop in on the Pocket Cinema Camera 4K, from 4K image area down to HD image area, helps any lens become more useful and helped with the DZO Film 20-70mm.

Ahhh, the focus shift of a lens can be the bummer of a rack focus. On the DZO Film 20-70mm lens, a focus change from a mid-ground object to an object in the background, I saw near-zero focus breathing. If I was so bold as to quickly rack focus from a very close object to the far background, I found a focus shift, but come on, that is a 270-degree rack focus. I was more likely to bounce my framing, which is far more noticeable than to notice a slight focus shift.

The potential for lens flair in the DZO Film 20-70mm is one of the few weak points with this lens. The DZO 20-70mm T2.9 will flare slightly more than broadcast lenses that I have used in the past but less than a DSLR lens like a Nikon 24-70mm or Canon 24-105mm. What I found is if a light source is striking the front element at a steep angle, a ghosting flare may appear. I tried to show as much footage where a flare may present itself, like concert footage, to show how the lens performs.
Most of the time, the Wooden Camera Zip Box Pro I had attached to the DZO Film 20-70mm kept most of the unwanted lens flare at bay. One of the last shoots I had with the DZO Film 20-70mm included a projection screen, and the blue light from the screen did cause an unwanted blue haze. The Nikon 24-70mm I had on my URSA Mini Pro, set up next to my Blackmagic Pocket Cinema Camera 4K and DZO Film 20-70mm, flared from the blue projection screen too. This lens does flare, and most lenses, you can find a way to mitigate or manage it.


I also found an interesting light source flare. When the lens is pointed at a light source, like a bright light bulb or in my case a light at the Nashville New Year Eve’s concert, the flare has a unique circle around the light source. I think it looks interesting; you may disagree.

I do not see much of any see image loss when the DZO 20-70mm had its aperture set to the widest setting, T2.9. On some lenses, the widest aperture gives the lowest image fidelity. In the case of the 20-70mm, the image looked as good at T4 as it did at T2.9. When I shot at T5.6 – T8, I saw a slightly better picture, slightly.


I was hoping the dedicated back-focus button on the rear of the lens would perform similar to a macro button on a B4 ENG lens. Nope, this feature is solely for adjusting the lens’ back focus and keeping the lens parfocal. Grab your Siemens star and set your back focus on the DZO Film 20-70mm if you have not yet. Once I set the back focus for my Blackmagic Pocket Cinema Camera 4K, I did not have to go back and adjust it, and in the time I used the lens, several weeks, I did not have to readjust the back focus.

Yes, this is a parfocal lens. I zoomed in and focused all day long with the DZO Film 20-70mm on the Blackmagic Pocket Cinema Camera 4K. Not many lenses are parfocal for the price and performance of the DZO. It seems like these days a parfocal lens at this price, with cinema-style housing, is kind of scarce on the market. 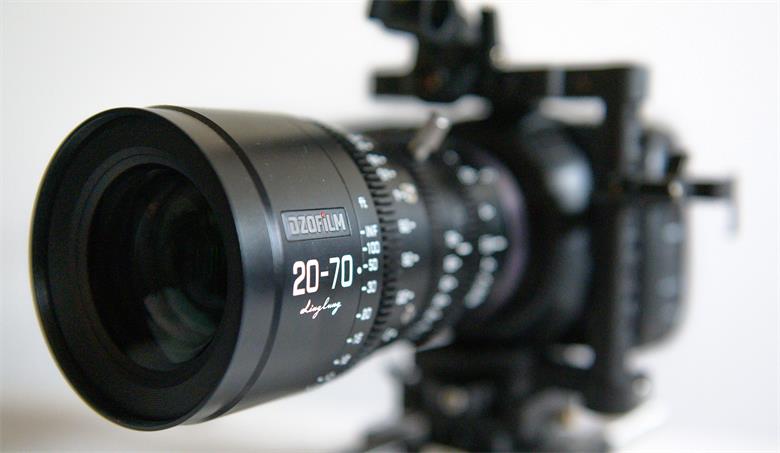 Lens Build
The all-metal 20-70mm weighs in at 2.4lb with an 80mm front diameter. In my photos, you can see I used the Wooden Camera Zip Box Pro which can be clipped on or as swing-away. The weight of the lens and Zip Box Pro felt solid, and I did not have any fears of the combo weighing too much for the M4/3 lens mount on the Blackmagic Pocket Cinema Camera 4K. All of the lens rings have standard 0.8 pitched gears, and aperture has 12 blades giving the sunspot flare an interesting star pattern. I thought this lens was robust and likely able to take the abuse of constant work. The lens also features threads on the front, allowing one to screw on filters instead of using a dedicated matte box. 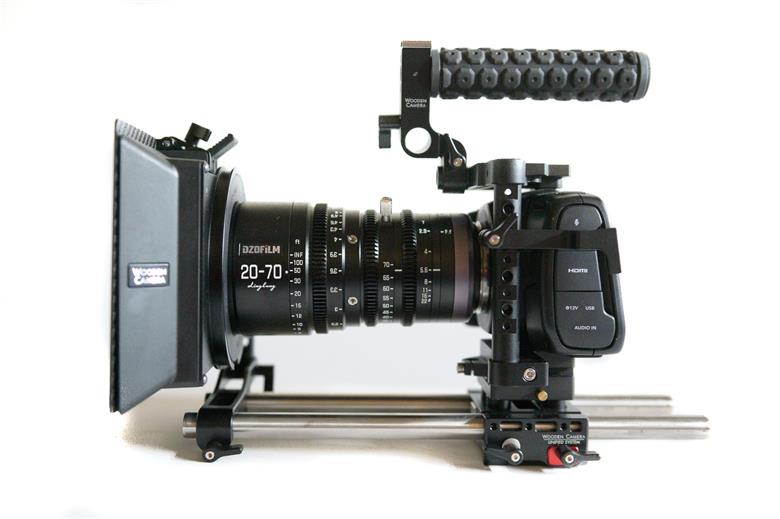 Stayed On The Camera

When faced with carrying or carting all my gear around, I sometimes must make critical decisions while in a parking lot. If a piece of equipment stays on the truck, then it will likely not be used for the shoot. It can be hard to go back and forth to the truck when in the heat of a shoot, no matter how simple it may turn out. The DZO Film 20-70mm staying on my camera meant it was the first lens I used on a shoot day. If I had the 10-24mm f/2.9, I feel like I could have just carried the 20-70mm and the 10-24mm and be suitable for almost any situation. Two lenses are much easier to carry around than a pelican case full of different options. I like options too, but sometimes I want to make my life a little easier and only carry what I know I will need.

The only feature lacking is this: no image stabilization. Those using M4/3 lenses with internal stabilizing elements may be reluctant to jump on board with the more manual cinema-style lens without internal image stabilization. I believe the benefits of the DZO Film 20-70mm outweigh these few shortcomings.

Announced along-side the DZO Film 20-70mm, the 10-24mm appears to be an excellent complementary lens in what looks like a great 2-lens kit. In my shooters’ mindset, I want to see a longer telephoto option from DZO Film to make the two lens kit into a three-lens package. Then you may be ready for just about any shooting situation. As of right now, the 10-24mm, untested by me, will face stiff competition from the Panasonic 10-25mm f/1.7. The Panasonic is more of a hybrid cinema-style lens with a wider aperture. 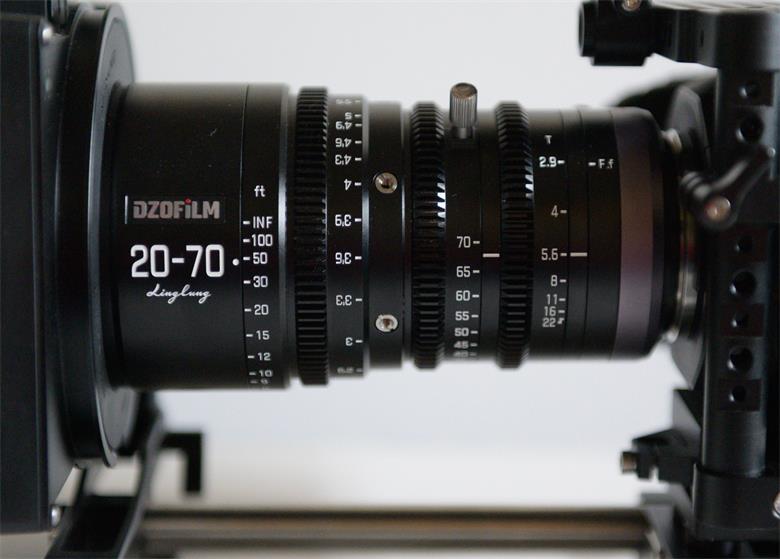 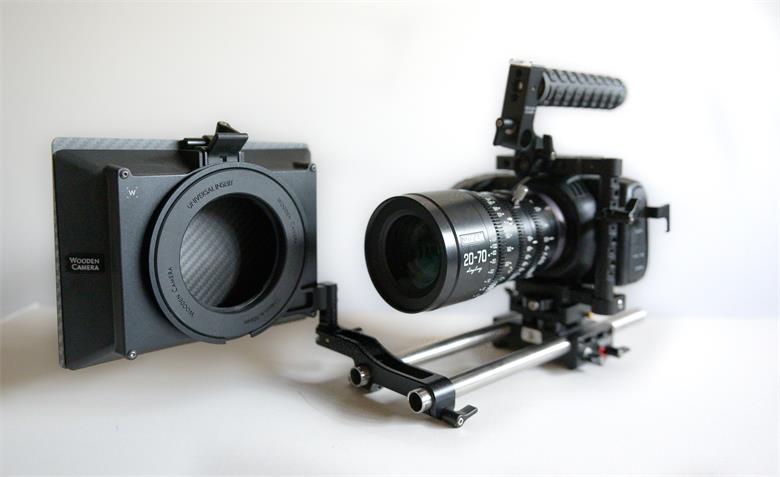